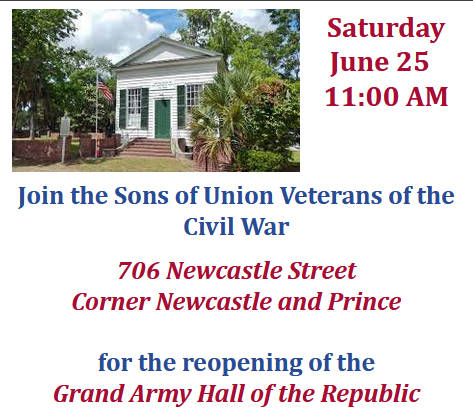 Join the Sons of Union Veterans of the Civil War on Saturday, June 25th for the reopening of the Grand Army Hall of the Republic celebrating the completion of structural repairs made possible by Beaufort County Council ATAX funds.

The Ribbon Cutting at 11 AM, Recognition of Juneteenth with address by William A Yancey, Jr. followed by Classic Lowcountry Fish Fry. The Hall is located at 706 Newcastle Street, at the corner of Newcastle & Prince.

The Grand Army of the Republic, a fraternal organization founded in 1866, was comprised of Union veterans of the Civil War. Also known as the GAR, the society included chapters for white veterans and separate chapters for black veterans. Called David Hunter Post Number 9, this chapter in Beaufort was a black post formed in 1888; many of the veterans in this chapter had been former slaves on nearby Sea Island cotton plantations.

Veterans of the United States Colored Troops named their local post after General David Hunter. General Hunter was famous for illegally emancipating slaves in South Carolina, Georgia, and Florida following the capture of Fort Pulaski on the Savannah River on April 10, 1862. President Lincoln rescinded the order – known as General Order No. 11 – for political reasons, though he then permanently emancipated slaves on January 1, 1863. General Hunter also founded the 1st South Carolina Volunteer Regiment, comprised of black soldiers from Union-occupied districts.

Members built this meeting house in 1896. Alice Washington, a descendant of Fred S. Washington, tells us that, “[A]ccording to a deed, David Hunter Post No. 9 rewarded the ‘Fred S. Washington Woman’s Relief Corps the Hall and grounds for their part and to help to pay for the Hall and for their willingness in helping to care for the veterans.’ A partial list of those who signed the deed was Leroy Gibbs, Moses Brown, and Edward Wallace, Commander. This was done June 15, 1896.”

Rev. Dr. Elijah Washington and his team of volunteers are currently the leaders of GAHR.

The Beaufort County Historical Society has markers in front of the building.

Second Founding of America is a not for profit philanthropic partner of the Reconstruction Era National Historical Park and the Reconstruction Era National Historic Network (of related sites.) In this capacity we have raised funds for four major capital improvement projects the first of which is the completed Grand Army Hall, with three others funded and in the planning and approval stages. Each is related to growing and making the RENHP more sustainable by generating National, Regional and Local Support. And each will have limited public access through National Park Service Interpreative Rangers on walking tours.

If you would like to help us as we spread across the county, region and state, please consider donating and volunteering.
https://www.secondfoundingofamerica.org/donate