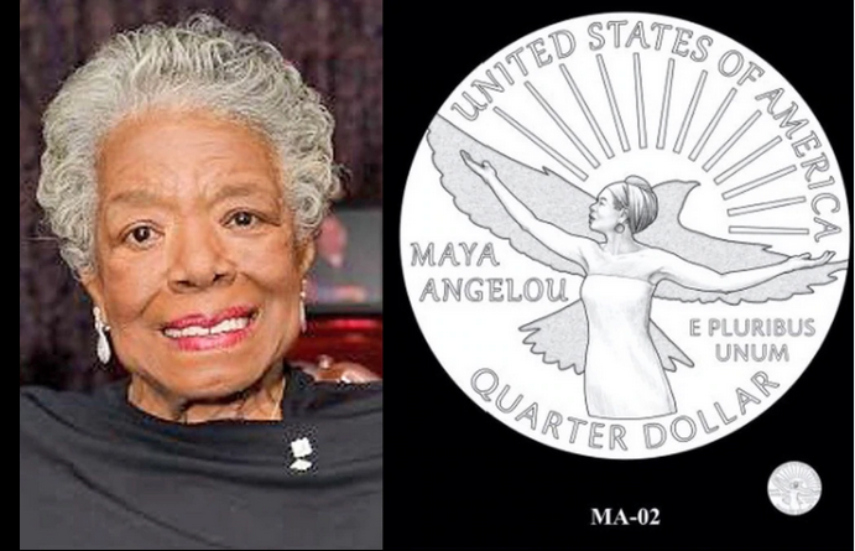 Poet and activist Maya Angelou, who died in 2014, has become the first Black woman to be featured on a United States coin.

The Maya Angelou Quarter is the first coin in the American Women Quarters Program. from the U.S. Mint. Maya Angelou was a celebrated writer, performer, and social activist. She rose to international prominence as an author after the publication of her groundbreaking autobiography “I Know Why the Caged Bird Sings.” Angelou’s published works of verse, non-fiction, and fiction include more than 30 bestselling titles.

Angelou’s remarkable career encompasses dance, theater, journalism, and social activism. She appeared in Broadway and off-Broadway plays, including “Cabaret for Freedom,” which she wrote with Godfrey Cambridge. At the request of Dr. Martin Luther King, Jr., she served as northern coordinator of the Southern Christian Leadership Conference. In 1978, she was a National Book Award judge for biography and autobiography.

Senators Deb Fischer and Catherine Cortez Masto were first to introduce the program, which was passed in 2020. Now, the United States Mint has begun shipping the first quarters featuring an image of iconic poet.

“These past 100 years of suffrage would not have been possible without the work of so many courageous women, whose efforts paved the way for many more to make crucial contributions to the history of the United States,” Fischer and Cortez Masto previously told reporters.

Angelou read “On the Pulse of Morning” at the 1992 inauguration of President Clinton. Angelou’s reading marked the first time an African American woman wrote and presented a poem at a presidential inauguration. She was also only the second poet in history to do so, following Robert Frost, who recited a poem at President Kennedy’s inauguration in 1961.

Angelou received more than 30 honorary degrees and was inducted into the Wake Forest University Hall of Fame for Writers. In 2010, President Obama awarded her the Presidential Medal of Freedom. She was also the 2013 recipient of the Literarian Award, an honorary National Book Award for contributions to the literary community.

The reverse (tails) depicts Maya Angelou with her arms uplifted. Behind her are a bird in flight and a rising sun, images inspired by her 1969 autobiography, “I Know Why the Caged Bird Sings,” and symbolic of the way she lived.