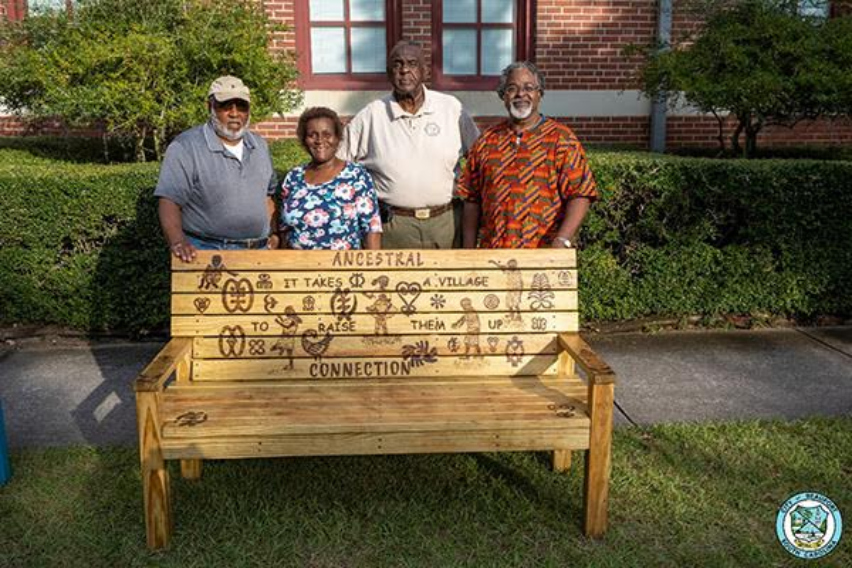 Five new artist-designed benches have been added to the Cultural Arts District’s Art Bench Project, making for a total of 17 benches displayed around the city, depicting the cultural history of Beaufort, for both viewing and sitting.

“We’re thrilled that we are expanding this project year by year,” said Andrea Hackenberger, the City’s events manager and a member of the Cultural Art District Advisory Board. “This unique project tells the story of Beaufort in both a beautiful and functional way.”

The newest benches were unveiled last Thursday at USCB’s Center for the Arts lawn. The benches were built by Lowcountry Habitat for Humanity. Each is sponsored by a different organization. The new ones include:

Do All the Good You Can Do

Bench will be placed in the church’s playground area.

About the bench: The quote inscribed across the bench is illustrated with various design elements Illustrating the John Wesley quote, “Do all the good you can do.” Peace symbols, raised hands, hearts, people holding hands, love and unity created a special opportunity for the tweens and teens of Carteret Street United Methodist Church’s youth group to participate in something that everyone can enjoy for a long time. This is a colorful, youth-directed expression of positivity and inclusiveness.

Waterfront Park – Then and Now
Sponsor: City of Beaufort
Artist: Mary Ann Browning Ford
Bench will be set up at west end of Waterfront Park near pavilion.

About the bench: Henry C. Chambers knew, when he became mayor of Beaufort in 1969, that the city’s dilapidated waterfront demanded to be remade. And he had the vision to do it.

Chambers saw the potential for a waterfront park that could bring “seven acres of water” to anyone who lived in or visited Beaufort. It would not just be for the privileged, but for all of us – a community front lawn where concerts and festivals could be held, kids could play, and everyone could stroll along the promenade, soaking in the beauty of the marshes, the bridge, the marina, the boats, the dolphins – everything that makes Beaufort the truly special place it is.

Today, we have that waterfront, but in the 1950s, it was quite a different story, as depicted on the bench.

About the artist: Mary Ann Browning Ford is a member of the National Association of Women Artists and a scenic artist/designer at Center for the Arts. Mary Ann researched the waterfront as it existed in the 1950s, and examined photos from that period to show what the waterfront looked like as you were crossing the Woods Memorial Bridge toward Beaufort.

About the bench: Dragon Boat Beaufort, which raises money to help cancer patients, started in 2012 inspired by the documentary film “Awaken the Dragon,” presented at the Beaufort International Film Festival. With no resources and no equipment, the first practice was done sitting on chairs and paddling with brooms in Waterfront Park. The mixed competitive team comprises many cancer survivors as well as supporters who practice several times a week. DragonBoat Beaufort holds an annual Race Day in Waterfront Park where local organizations form teams to race dragon boats. All money raised goes to an outreach program used to assist cancer patients who live, work, or receive treatment in Beaufort County with expenses not covered by traditional means.

About the artist: Greg Rawls’ primary mediums are glass and wood. He has been designing and building the sets for the Beaufort Theatre Company for seven years. He also designs all of the graphic materials for Dragon Boat Beaufort.

About the bench: Pigeon Point residents love their neighborhood and welcome this opportunity to share their enthusiasm! Linda Silk Sviland’s creativity captures the charm of today’s lifestyle – fishing at the boat landing, biking, and dog-walking along shady streets, family fun at the three popular parks – while the back of the bench reflects Pigeon Point’s unique history over more than a century, all of which endears the neighborhood to its residents and its many visitors.  And soaring above it all is our beloved passenger pigeon!

About the artist: Linda Silk Sviland’s creative output has always been in the public eye — from her adolescent launch as a costume designer for the professional stage; to creating national political campaign graphics; to designing public building murals celebrating Olympic champions and Black community trailblazers. Since retiring to Beaufort, Linda feels blessed to continue to “put herself out there” with the public art bench project. She has designed and painted a number of benches.

About the bench: The bench Ancestral Connection is dedicated to the responsibility that we all have to teach, protect, encourage, guide and to raise our youth into the next generation of elders. The images on the bench depict children playing without worry, surrounded by the Adinkra symbols that represent the ancestral connection of parents, teachers,  and the neighborhood, all that have imparted their wisdom into their survival, their growth, and their journey in this life.

The main symbols are the Sankofa: “Go back and fetch it, or Learning from the past to build the future,” and Mate Masie: “What I have learned I keep.” These are reminders that we need the knowledge of our ancestors, and the lessons they taught. Sankofa is for us to acknowledge the situations our ancestors went through, Mate Masie that we remember and prepare for those coming afterwards and never forget, “It takes a village to raise them up.”

About the artist: Hank D. Herring is the owner of the Green Herring Art and Framing Studio on Bay Street. He learned about art at an early age from watching and being instructed by artistic family members and school art programs. After high school, Hank enlisted in the Marine Corps for a 20-year career. His occupational specialty was machinist. Working in the machinist field allowed him to learn more creative ways to manipulate metals, plastic, glass, and composite materials into art. During his time in the military, Hank made a correlation between found objects and life lessons that he expresses in his art to this day.

Hank continually shows his passion for helping the community and the arts through mentoring programs, public events, and forums. He has mentored in public and private schools, and has served as a teaching artist for the Kennedy Centers Teaching Artist Program and the Low Country Arts Integration Project with Beaufort County School District. He served as a board member of the South Carolina Arts Alliance and as a consultant on local arts organizations’ special projects. Hank’s work has been featured in museums and galleries throughout the United States.